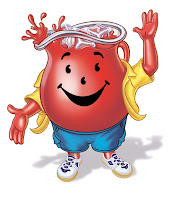 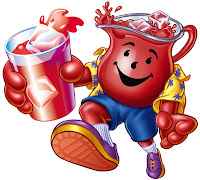 ...is the mascot for Kool-Aid, a popular drink mix. The character has appeared on television and print advertising as a fun-loving character, appearing to children and sharing his Kool-Aid beverage, as well as his catchphrase "Oh yeah!" He is a gigantic pitcher, filled with Kool-Aid and marked with a finger-painted smiley face.

Before he was officially the Kool-Aid Man back in 1975, he was the “Pitcher Man”. The Pitcher Man was created in 1954 by Marvin Plotts, an art director for a New York-based advertising agency. General Foods had just purchased Kool-Aid from the drink’s creator Edwin Perkins the year before, and Plotts was charged with drafting a concept to illustrate the copy message: “A 5-cent package makes two quarts. " Working from his Chicago home on a cold day, Plotts watched as his young son traced smiley face patterns on a frosty windowpane," recounts Sue Uerling, marketing and communications director for Hastings Museum of Natural and Cultural History. This inspired Marvin Plotts to create a beaming glass pitcher filled with flavorful drink: the Pitcher Man. From there on the joyful pitcher was on all the Kool-Aid’s advertisements.

In 1975 Kraft Foods created the character’s first costume with arms and legs. He also became more of an action figure in commercials — performing extreme sports and busting through brick walls. Kool-Aid Man is famously known for shouting, “Oh, Yeah!” as he is summoned by thirsty children with the phrase, "Hey, Kool-Aid!". Commercials of the era also featured a catchy jingle, always ending with the Kool-Aid Man's phrase.
Hosted By Jeremy [Retro]