G is for Glen or Glenda? [And Now For Something Completely Different] 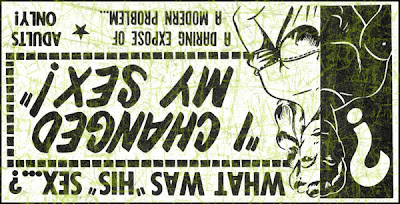 Ed Wood Jr: Glen or Glenda?
Wood's big break came in 1953 when he was hired by producer George Weiss to make an exploitation film, I Changed My Sex, based on the life of transsexual Christine Jorgensen. After Jorgensen refused to collaborate on the film, Wood wrote a new autobiographical screenplay titled Glen or Glenda, a sincere and sympathetic study of transvestism. Wood directed and, using the alias Daniel Davis, played the titular character who has a fetish for cross-dressing and angora sweaters.
Angora was regularly featured in his films. His wife Kathy O'Hara and others recall that Wood's transvestism was not a sexual inclination, but rather a neomaternal comfort derived mainly from angora fabric (Ann Gora also happened to be one of Wood's pen names). The medical experts in the film go to great lengths to stress that the transvestite is a perfectly normal heterosexual man who simply feels more comfortable and "more himself" when wearing women's apparel. There is even a fantasy vignette showing Glenda rebuffing the advances of a homosexual man. Even in his later years, Wood was not shy about going out in public dressed in drag as Shirley; his alter ego—female characters named Shirley also appear in many of his screenplays and stories.

Most of Wood's films have a rushed quality due to the tight shooting schedule and limited budgets. While most directors film only one scene per day (or just a fraction of one in more contemporary pictures), Wood might complete up to 30 scenes. He seldom ordered a retake, even if the original was obviously flawed. Glen or Glenda, shot in just four days for $26,000, was done in a semi-documentary style. Narration and voice-over dialog was added to generous amounts of film-library stock footage (a cost-saving trick he used in his later films). The love-interest role of Barbara was played by Wood's real-life girlfriend, Dolores Fuller. She went on to appear in his next two films. Béla Lugosi, who was not told the film was about a transvestite, was paid $1,000 in cash for one day of filming. In a dark haunted-house set, speaking in vague, baffling metaphors and nursery rhymes, he played a portentous, omnipotent narrator.

The centerpiece of the film is a 15-minute fantasy sequence that illustrates Glen's tormented state of mind. Wood utilizes a barrage of surreal, dream-like vignettes with personalized symbolism. Producer George Weiss added to the confusion by inserting footage of flagellation and bondage, reminiscent of the fetish films of Irving Klaw, from another production. In this sequence, Barbara is pinned beneath a large tree (in her living room), and Glen rescues her; they are married with the Devil acting as best man; a shirtless man vigorously flogs a woman reclining on a couch; lewd burlesque dancers gyrate to blaring jazz music and tear at their clothes; a woman gagged and bound to a yoke-like pole is untied by another gagged woman; a lust-crazed man roughly assaults a seductress in a flimsy negligee; an enraged Glenda rips Barbara's blouse to shreds after she laughs at his appearance. Bela Lugosi appears in several scenes also rejecting Glenda and droning on repeatedly about "snips and snails and puppy-dog tails". The film was released under several regional titles such as Transvestite, I Led Two Lives, and He or She?.
Source: http://en.wikipedia.org
Hosted By Jeremy [Retro]