Y is for Yoda! 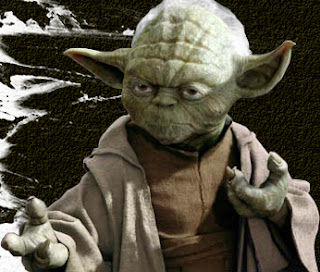 Who The Man... YodaMan!
Yoda is a fictional character in the Star Wars universe, appearing in the second and third original films, as well as all three prequel trilogy films. Yoda made his first on-screen appearance in Star Wars Episode V: The Empire Strikes Back where he is responsible for training Luke Skywalker in the ways of the Force. His final chronological appearance is Star Wars Episode VI: Return of the Jedi, when he dies peacefully at the age of 900. He also appears extensively in the two animated Clone Wars series, as well as the Star Wars Expanded Universe of novels and comic books.

In the original films, he trains Luke Skywalker to fight against the evil Galactic Empire. In the prequel films, he serves as a leading member of the Jedi Council and as a general in the Clone Wars.

In 2008, Yoda was selected by Empire magazine as the 25th greatest movie character of all time. On their list of the 100 Greatest Fictional Characters, Fandomania.com ranked Yoda at number 60.
Hosted By Jeremy [Retro]