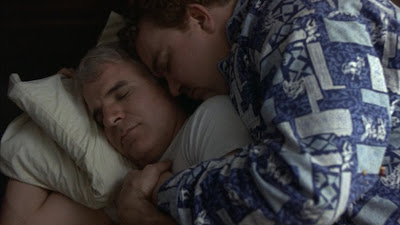 Back In Baby's Arms Again!
What was the name of the motel Neal and Del stayed at in Wichita, Kansas?
- Braidwood Inn. The Braidwood Inn was run by Del's old friend Gus, played by Charles Tyner. It was at the motel that one of the movies funniest scenes takes place. Neal and Del not only have to share a room, but share a bed as well. The morning after, they wake up holding each other while "Back in Baby's Arms" plays on the movie's soundtrack.
To what does Neal compare spending the night with Del?
- A date with a chatty Cathy doll. Neal said, "I expect a string to come out of your chest...only you'd be the one pulling it!"
Del is a salesman for what company?
- American Light & Fixture. Shower ring curtain division.
What star makes a non speaking cameo at the beginning of the movie?
- Kevin Bacon. Credited as Taxi Racer in the movie, Bacon races Steve Martin as they run down opposite sides of the street, each trying to beat the other to an available cab. Martin had the race won, but falls over a large trunk that turns out to belong to John Candy's character.
While riding on the bus to St. Louis, Del leads the passengers in a sing-a-long of what television show's theme song?
- The Flintstones. Del saves the day with this song when the passengers don't like Neal's idea to sing "Three Coins in a Fountain".
What team does Neal ask Del about after their 'encounter' in bed?
- Bears. Those aren't pillows!
I love this film, it makes travel less... well less complicated!
Happy Friday...
-Jeremy [Retro-Zombie]
--------------------------