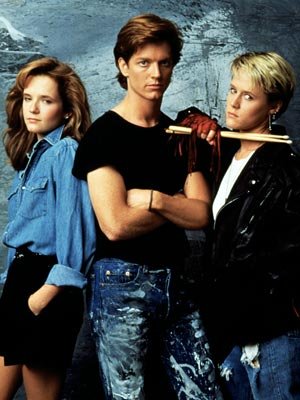 Pain is in Our Eyes!
Lea Thompson originally turned down the lead when she was approached by Howard Deutch. She then accepted the role after Howard the Duck flopped, and Howard Deutch again asked her to play the role of Amanda Jones.

Elias Koteas was discovered by John Hughes auditioning for another one of his films and it was at his suggestion that he would be cast in the role of Duncan.

The car that Watts drives in the movie is a very dilapidated mini cooper modified for driving in America. Between 1960 and 1967 only 10,000 were sold in the U.S. and then discontinued. Although they are very popular now, they were quite alien and unknown to most of the American public in 1987.

Several years before this movie was filmed, Eric Stoltz had been the original choice to play Marty McFly in Back to the Future, and he had even shot five weeks' worth of footage as Marty before he was replaced by Michael J. Fox. Lea Thompson, who plays one of Stoltz's love interests in Some Kind of Wonderful, played his would-be character's mother in Back to the Future.

In an earlier version of the script, Keith proposes to Susan (Watts' first name) at the end (August 1986 script).

When Martha Coolidge was hired to direct, she cast 'Kim Delaney' as Amanda Jones and Kyle MacLachlan as Hardy Jenns. When Coolidge dropped out before filming was to begin and Howard Deutch replaced her, he replaced Delaney with Lea Thompson (after Eric Stoltz suggested her for the role) and replaced MacLachlan with Craig Sheffer.