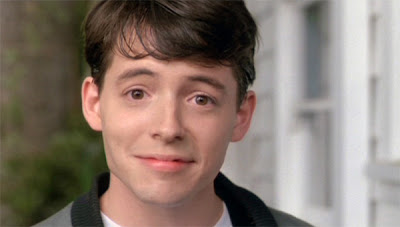 Just, Trust Me!
In an early draft of the script Ferris had two additional younger siblings and Jeanne was to be the middle child.

A number of key moments in the movie were created in the editing room: Jeannie kicking Roonie three times in the face (when there was in fact only one kick filmed); Ferris and Sloane's kiss in front of Roonie was originally just a brief kiss, but was later edited into the long kiss seen on film.

The Parade sequence (Twist and Shout scene) was filmed during the Von Steuben Day Parade. An annual event in the Chicagoland area.

Mia Sara says that Matthew Broderick actually tickled her feet and knees to get her to laugh naturally in the taxicab scene.

Most of the license plates are all abbreviations for titles of films by John Hughes. Katie's = VCTN (National Lampoon's Vacation); Jeannie's = TBC (The Breakfast Club); Tom's = MMOM (Mr. Mom); Rooney's = 4FBDO (Ferris Bueller's Day Off). The exception is Cameron's Ferrari (seen when Ferris first pulls out of the garage), the license plate of which reads NRVOUS.