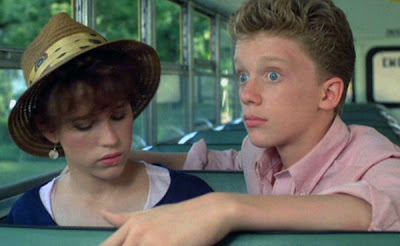 When Molly Ringwald and Anthony Michael Hall first met, they did not get along at all. Director John Hughes took them shopping at a music store and they discovered they had similar musical tastes and eventually got along.

The cake at the end of the movie is actually made of cardboard.

Both Molly Ringwald and Anthony Michael Hall were 16 years old upon release of Sixteen Candles.

The movie's line "Can I borrow your underpants for ten minutes?" was voted as the #86 of "The 100 Greatest Movie Lines" by Premiere in 2007.

The character of Long Duk Dong was supposed to be a teenager but Gedde Watanabe, who portrayed him, was 28 years old at the time this was filmed.

Other than Anthony Michael Hall, John Kapelos is the only actor to appear in all three of Hughes teen films that were under contract with Universal. In Weird Science he can been seen at the table in the bar. In The Breakfast Club, he serves as the janitor. In Sixteen Candles, he stars as Sam's future brother-in-law.