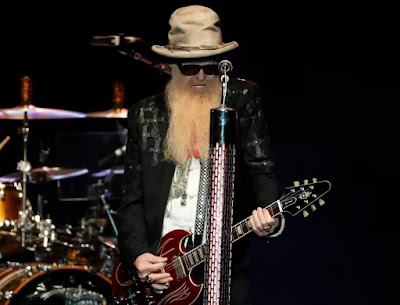 William Frederick Gibbons (born December 16, 1949) is an American rock musician who is the guitarist and primary vocalist of ZZ Top. He began his career in the Moving Sidewalks, who recorded Flash (1968) and opened four dates for the Jimi Hendrix Experience. Gibbons formed ZZ Top in late 1969 and released ZZ Top's First Album in early 1971. Gibbons possesses a gravelly bass-baritone singing voice and is known for his bluesy, groove based guitar style. He is also noted, along with ZZ Top bassist Dusty Hill, for his chest-length beard. Gibbons has made appearances with other artists and acted on television shows, most notably Bones. In 2001, Rolling Stone named him the 32nd greatest guitarist of all time!
I have been watching "BONES" and I had forgotten he was on there!
-Jeremy [Retro]
------------------------------
-------------------------
I am everywhere: TWITTER, FACEBOOK, HWR: SIX STRINGS MAGAZINE and HBA [HORROR SITES]. Last visit MY T-SHIRTS STORE at NEATORAMA something always going on and it is one click away!
-------------------------
Hosted By Jeremy [Retro]