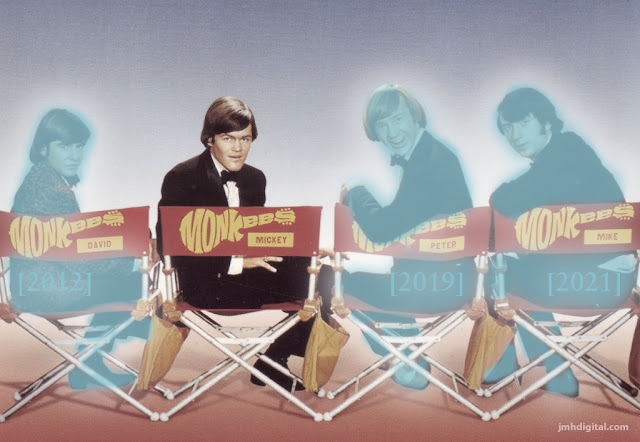 The Monkees were a rock and pop band, formed in Los Angeles in 1966, whose line-up consisted of the American actor/musicians Micky Dolenz, Michael Nesmith and Peter Tork alongside English actor/singer Davy Jones. The group was conceived in 1965 by television producers Bob Rafelson and Bert Schneider for the situation comedy series of the same name (described by Dolenz as "a TV show about an imaginary band ... that wanted to be the Beatles ... [but] was never successful"). Music credited to the band was released on LP, as well as being included in the show, which aired from 1966 to 1968. The group's popularity would ultimately endure well beyond the television series.
Robert Michael Nesmith (December 30, 1942 – December 10, 2021) was an American musician, songwriter, actor, producer, and novelist. He was best known as a member of the pop rock band the Monkees and co-star of the TV series The Monkees (1966–1968). His songwriting credits include "Different Drum", which became a hit for Linda Ronstadt and the Stone Poneys.

Peter Halsten Thorkelson (February 13, 1942 – February 21, 2019), known professionally as Peter Tork, was an American musician, composer, and actor who was best known as the keyboardist and bass guitarist of the Monkees and a co-star of the TV series The Monkees (1966–1968).