U is for... Underworld: Selene 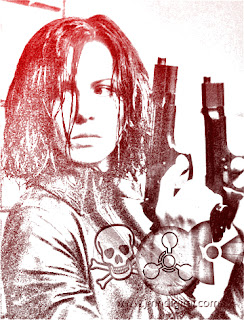 Selene was born to a Hungarian family. Her father was a well-known blacksmith who helped design a fortress for a general named Viktor. The fortress was actually a dungeon intended for the imprisonment of the Werewolf, William Corvinus, condemned for his bloody and destructive behavior and to keep Vampire Elder Markus under Viktor's control. After Lycans purportedly killed her family, Selene was the only one left alive who had walked through the corridors of the fortress. However, she did not know that her family was slain by Viktor himself, and believed Viktor had saved her from the Lycans. Viktor only let her live because of resemblance to his deceased daughter. The night of her family's murder she was made into a vampire by Viktor.
Hosted By Jeremy [Retro]