Planet Of The Apes vs. 12 Monkeys 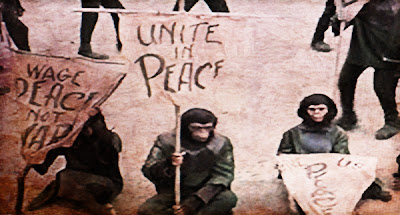 Okay I had watched all the films "Planet Of The Apes" I began to think of the movie "12 Monkeys" and found many things very much the same.  I think my favorite one is "Escape From Planet Of The Apes", because it is happy and pleasant until us stupid humans decide we know what is best for us. It had been a while since I had seen the films all together, so I had a different vision than I once had.
Summary:
-Spaceship lands and enters the unknown world of the Planet Of The Apes
We find out it is not an unknown planet, and we did this too ourselves.
-Spaceship lands again, we find out quickly we are not alone on the Planet Of The Apes
One bomb, one messed up race... total destruction.
-Spaceship lands instead of the future, it the past... what we don't understand "Kill It"
chase it down and destroy the future by doing the wrong thing.
-Hail Caesar... Oops... cats and dogs are dead, pets is going to primates!
then slaves, then war.
-Role Reverse, who are the bitches now?
This where the ideas of "12 Monkeys" comes into play we just keep destroying ourselves, just one giant circle of life/death. They are a great set of films to watch, when you are laid up and resting as I happened to be.  There is talk of yet another version/remake of this film, didn't Tim Burton prove that this was not such a great idea?
Now one last thing, the movies and the failed television series are well written enough that if you were to watch all of these pieces you can see that someone was doing their homework "Cornelius to Caesar to Cornelius to Galen to Cornelius" something like that.. Today is going to be "The Matrix"...
Hosted By Jeremy [Retro]