On the First Day of Creepmas: Oogie Boogie 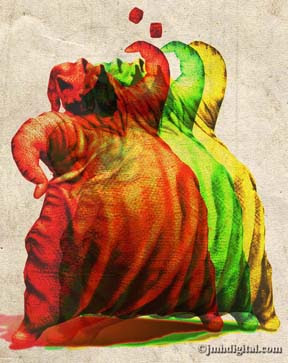 Oogie Boogie is a fictional character and the main antagonist in the Tim Burton-produced Disney movie The Nightmare Before Christmas. He is voiced by Ken Page.

Oogie Boogie is the Boogie Man, resembling a large burlap sack. His life revolves around gambling, and loves gambling with others' lives. He is also apparently "The Shadow on the Moon at Night" as the shadow shown on the moon was an exact replica of him. Wether or not this is just a coincidence is unknown.

Ironically, he has no skills for gambling; on three occasions he rolls snake eyes, and admits he has to resort to cheating when he slams his fist upon the table to shake the dice, resulting in 11. He is also somewhat lecherous, which is evident when he's easily distracted by Sally's bare and dismembered leg in which he takes off her shoe to set her piggies free by exploring them naturally and tickle her foot, but he probably would've also wanted to play "This Little Piggy" with her toes as well as to suck on them right afterward before licking her foot. According to Lock, Shock, and Barrel, as well as some of his deleted song material (which is included in the soundtrack version), he is also very good at making a concoction known as Snake and Spider Stew, though it would seem he tends to use people as ingredients. He is a sadist who has his henchmen abduct people and bring them to his lair for him to torture and eventually kill and/or add to his Snake and Spider Stew.

When Oogie Boogie is defeated, it is revealed that he is a colony of bugs wrapped in sacking. After the "brain bug" was seen it is possible and likely that he might just be a very intelligent bug.
Source: http://disneyvillains.wikia.com