On the Third Day of Creepmas: Lock, Shock & Barrel 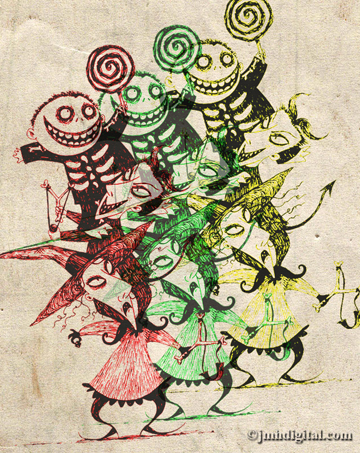 Lock, Shock, and Barrel are introduced as Oogie Boogie's not-so-loyal "little henchmen". They all three are trick-or-treaters, with faces similar to their masks (e.g. Barrel's skeleton mask has a huge grin on it and he has a near-permanent grin). Their names are a play on the phrase, "lock, stock, and barrel." Though not totally antagonistic, they are usually the comedy relief. They appear to be Anti-heroes or merely neutral characters, as they'll work for just about anyone who summons them.

Lock is supposedly the leader of Oogie's Boys, but does not think thoroughly and actually appears to be the least intelligent of the three. Lock wears a devil costume; his tail (real tail), his teeth are pointed sharply, his face is narrow and long-jawed, and his hair is formed into two horns making him, literally, a handsome devil. He loves being large and in charge, and gets upset when others insult him or take the lead; however, he goes along with others' ideas if he cannot come up with anything himself.

Shock is the most cunning and dangerous, and the only female of Oogie's minions. She has some contempt for the other two for their supposed stupidity. Shock wears a purple witch costume with an elongated hat. She has a high-pitched voice, green skin, a pointed nose, and stringy hair.

Barrel is Oogie's "star pupil," and mistakenly considered the most stupid of the three troublemakers, despite his protests to the contrary. He is the butt of many jokes made by his friends but usually gets even through his own tricks at which he always gets away with. Barrel wears a skeleton costume and has deformed feet, but otherwise resembles a small human boy, albeit one with white skin, sunken eyes, and perfectly coiffed green hair. His face is round and has a perpetual grin, except when he is angry. Barrel is usually the pilot of the walking bathtub the trio use as transport. He also unintentionally bothers Jack when asking him a number of annoying questions.
---------------------------
---------------------------
I am part of the 13 Days of Creepmas "http://creepmas.blogspot.com/" which is such a great idea, fun idea...
-Jeremy [iZombie]
Hosted By Jeremy [Retro]