On the Seventh Day of Creepmas: Seven Deadly Sins

Lust (fornication, perversion) —
Obsessive, unlawful depraved thought, or unnatural desire for sexual excitement, such as desiring sex with a person outside marriage or engaging in unnatural sexual appetites. Rape and sodomy are considered to be extreme lust and are said to be mortal sins. Dante's criterion was "excessive love of others," thereby detracting from the love due to God. Lust prevents clarity of thought and rational behavior.

Gluttony (waste, overindulgence) —
Thoughtless waste of everything, overindulgence, misplaced sensuality, uncleanliness, and maliciously depriving others. Marked by refusal to share and unreasonable consumption of more than is necessary, especially food or water. Destruction, especially for sport. Substance abuse or binge drinking. Dante explains it as "excessive love of pleasure".

Greed (treachery, avarice) —
A strong desire to gain, especially in money or power. Disloyalty, deliberate betrayal, or treason, especially for personal gain or when compensated. Scavenging and hoarding of materials or objects. Theft and robbery by violence. Simony is the evolution of avarice because it fills you with the urge to make money by selling things within the confines of the church. This sin is abhorred by the Catholic Church and is seen as a sin of malice. Dante included this sin in his first novel. Simony can be viewed as betrayal. Thomas Aquinas on greed: "it is a sin against God, just as all mortal sins, in as much as man condemns things eternal for the sake of temporal things."

Sloth (apathy, indifference) —
Apathy, idleness, and wastefulness of time. Laziness is particularly condemned because others must work harder to make up for it. Cowardice or irresponsibility. Abandonment, especially of God. Dante wrote that sloth is the "failure to love God with all one's heart, all one's mind and all one's soul".

Wrath (anger, hatred) —
Inappropriate (unrighteous) feelings of hatred and anger. Denial of the truth to others or self. Impatience or revenge outside of justice. Wishing to do evil or harm to others. Self-righteousness. Wrath is the root of murder and assault. Dante described wrath as "love of justice perverted to revenge and spite".

Envy (jealousy, malice) —
Grieving spite and resentment of material objects, accomplishments, or character traits of others, or wishing others to fail or come to harm. Envy is the root of theft and self-loathing. Dante defined this as "love of one's own good perverted to a desire to deprive other men of theirs".

Pride (vanity, narcissism) —
A desire to be more important or attractive to others, failing to give credit due to others, or excessive love of self (especially holding self out of proper position toward God). Dante's definition was "love of self perverted to hatred and contempt for one's neighbor". In Jacob Bidermann's medieval miracle play, Cenodoxus, superbia is the deadliest of all the sins and leads directly to the damnation of the famed Doctor of Paris, Cenodoxus. Pride was what sparked the fall of Lucifer from Heaven. Vanity and narcissism are good examples of these sins and they often lead to the destruction of the sinner, for instance by the wanton squandering of money and time on themselves without caring about others. Pride can be seen as the misplacement of morals. 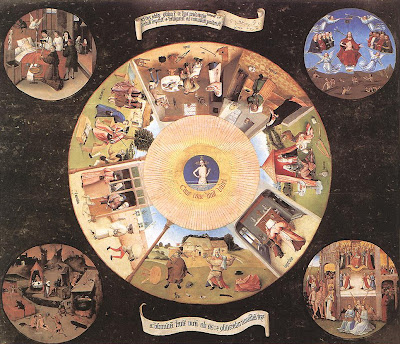