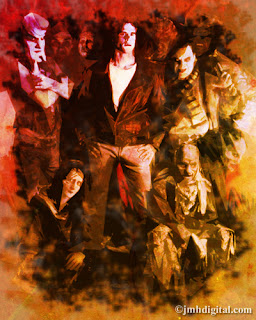 Okay this was tough as I walked around my movies thinking of my favorites, if I did that we would be here for days.  So what I did was the first "10" I could think of must be my best, considering those were the first my brain had chosen. I wanted to thank Ellie @ "http://elliegarratt.blogspot.com" for helping make this all possible, she is a very cool person whom I only met maybe six months ago.
One with my show, thanks everyone!
Jeremy [iZombie]
Conan the Barbarian -
Conan's Father: Fire and wind come from the sky, from the gods of the sky. But Crom is your god, Crom and he lives in the earth. Once, giants lived in the Earth, Conan. And in the darkness of chaos, they fooled Crom, and they took from him the enigma of steel. Crom was angered. And the Earth shook. Fire and wind struck down these giants, and they threw their bodies into the waters, but in their rage, the gods forgot the secret of steel and left it on the battlefield. We who found it are just men. Not gods. Not giants. Just men. The secret of steel has always carried with it a mystery. You must learn its riddle, Conan. You must learn its discipline. For no one - no one in this world can you trust. Not men, not women, not beasts. [Points to sword] Conan's Father: This you can trust.

Beetlejuice -
Betelgeuse: Ah. Well... I attended Juilliard... I'm a graduate of the Harvard business school. I travel quite extensively. I lived through the Black Plague and had a pretty good time during that. I've seen the EXORCIST ABOUT A HUNDRED AND SIXTY-SEVEN TIMES, AND IT KEEPS GETTING FUNNIER EVERY SINGLE TIME I SEE IT... NOT TO MENTION THE FACT THAT YOU'RE TALKING TO A DEAD GUY... NOW WHAT DO YOU THINK? You think I'm qualified?

The Adventures of Buckaroo Banzai Across the Eighth Dimension -
Buckaroo Banzai: Hey, hey, hey, hey-now. Don't be mean; we don't have to be mean, cuz, remember, no matter where you go, there you are.

The Lord of the Rings: The Return of the King -
[Aragorn is crowned King] Aragorn: This day does not belong to one man but to all. Let us together rebuild this world that we may share in the days of peace.

Nightbreed -
Dr. Philip K. Decker: [smirking] Quite a dance huh? Death everywhere and you and me in the middle!

Army of Darkness -
[Upon getting the powered glove in place of his right hand] Ash: Groovy.

Highlander - [Saying his farewell to Rachel] Connor MacLeod: Hey, it's a kind of magic!

Pet Sematary - Gage: No Fair! No Fair, No Fair!

Star Trek II: The Wrath of Khan -
Kirk: Spock!
Spock: The ship... out of danger?
Kirk: Yes.
Spock: Don't grieve, Admiral. It is logical. The needs of the many outweigh...
Kirk: ...the needs of the few...
Spock: ...Or the one. I never took the Kobayashi Maru test until now. What do you think of my solution?
Spock: I have been and always shall be your friend.
[Holds up his hand in the Vulcan salute]
Spock: Live long and prosper.

The Devil's Advocate -
Kevin Lomax: "Better to reign in Hell than serve in Heaven", is that it?
John Milton: Why not? I'm here on the ground with my nose in it since the whole thing began. I've nurtured every sensation man's been inspired to have. I cared about what he wanted and I never judged him. Why? Because I never rejected him. In spite of all his imperfections, I'm a fan of man! I'm a humanist. Maybe the last humanist.
Hosted By Jeremy [Retro]