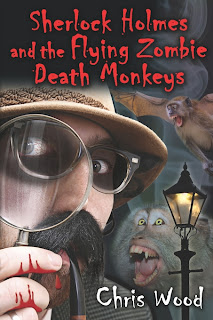 Chris Wood (Author) "Sherlock Holmes and the Flying Zombie Death Monkeys" which was released at the end of year 2010, also getting it's release in the UK now. His first book in the series in 2009 titled "Sherlock Holmes and the Underpants Of Death", both tell the romping adventures of Sherlock Holmes in way you have ever written about the sleuth and his life mate Watson. A journey of jesting, jolting and oddities into four stories... Oh Yeah, Flying Monkey Zombies in London. Some say "a writing parody" on this talented writer I say bring more to the table and "Rock that Sherlock". Okay I had a chance to give him the Q & A treatment, in my usual fashion. So please read on and get to know author Chris Wood. Thanks Chris for being part of your world and the insight to Holmes...

CLICK HERE TO READ THE Q AND A:
TWO THUMBS/EIGHT FINGERS