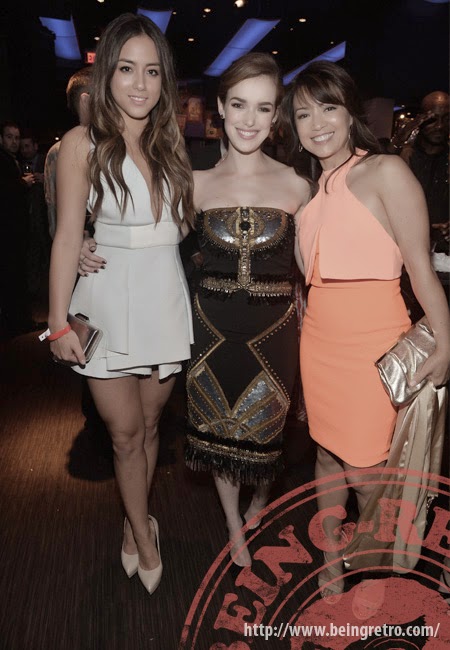 Chloe Bennet as Skye: A civilian computer hacker and member of the hacktivist group called "the Rising Tide", with an obsession for superheroes, whom Coulson recruits in the pilot episode. Skye is described as "bubbly and goofy" but "also warm, edgy and witty". She can more than hold her own in any situation. In "The Girl with the Flower Dress", it is revealed that Skye joined S.H.I.E.L.D. and Rising Tide in order to find out about her parents. In "Seeds", it is revealed that Skye was designated by S.H.I.E.L.D. as an '0-8-4' (object of unknown origin). After she is shot twice in the stomach and given hours to live in the episode "T.R.A.C.K.S.," she is subjected to the same regenerative serum used to revive Coulson, in "T.A.H.I.T.I". In "Yes Men," Coulson shares the secret alien nature of the serum with her, and the two make a pact to work together to uncover more information about it.

Elizabeth Henstridge as Jemma Simmons: An agent of S.H.I.E.L.D. who specializes in life sciences (both human and alien). She is generally cheerful and enthusiastic about her work. Agents Fitz and Simmons are close partners. Hendstridge and Caestecker agreed at Paleyfest 2014 that Fitz and Simmons have a brother/sister relationship.

Ming-Na Wen as Melinda May: A S.H.I.E.L.D. ace pilot and weapons expert, whose nickname is "the Cavalry", although she dislikes the name, as the events that led to its coining during her time as a field agent haunt her, having left her "very quiet and a little damaged". The experience was so horrific that she took an obscure desk job before Coulson recruits her in the series pilot. According to Wen, May "needed to be saved. She returned to S.H.I.E.L.D. out of loyalty to Coulson, but there's a part of her that remains reluctant. She still gets her pissed-off face. If it weren't for his intervention, she'd still be down in that dark, dingy room stapling things." The character was originally listed with the name Agent Althea Rice on casting sheets. In the episode "Yes Men," she is revealed to be aware of how Coulson was resurrected, and to be spying on Coulson either on behalf of superior officers or another organization.