Zombies, What Are We Really? 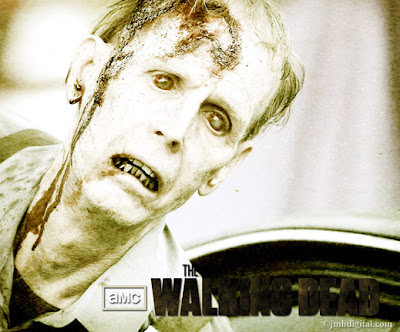 IT HURTS... IT REALLY HURTS...
The word zombie refers to the ‘living dead’. In folklore zombies are portrayed as innocent victims who are raised in a comatose trance from their graves by malevolent sorcerers, and led to distant farms or villages where they toil indefinitely as slaves. Zombies are recognized by their docile nature, by their glassy empty eyes, and by the evident absence of will, memory, and emotion. Part of their souls may also be captured by the sorcerers. Zombies can only return to the world of the living upon the death of their masters. Accounts are sometimes cited of actual people who have undergone this ordeal, were declared dead, and later turned up at the homes of their kin in various degrees of health.

Sources indicate that the word is of African origin. The cadaver or spirit of a deceased person is called zumbi in the Bonda language, ndzumbi in Gabon, and nzambi in Kongo. However, the conviction that zombies exist is more widespread. It is encountered not only in sub-Saharan Africa, but also in the Caribbean and in Latin America.

A controversial theory by Wade Davis suggests that there may well be an ethnobiological basis for popular reports of the zombie phenomenon in Haiti. He refers to a case of zombification which had been verified by a team of physicians. In 1962 Clairvus Narcisse was pronounced dead at a hospital, and buried 8 hours later. In 1980 Clairvus reappeared, claiming that he had been made a zombie by his brother because of a land dispute. Davis argues that Clairvus was mistakenly diagnosed as dead, buried alive, and taken from the grave. Among the various preparations of Haitian sorcerers, Davis identified a marine fish containing tetrodotoxin, an extremely potent neurotoxin which induces a complete state of peripheral paralysis and imperceptibly low metabolic levels. He postulates that the Haitian belief in zombies could be based on those rare instances where the individual receives the correct dosage of the poison, is misdiagnosed as dead, and is taken from the grave by a sorcerer. Moreover, Davis argues that zombification is a form of punishment imposed by Bizango secret societies to maintain order in local communities.

Other scholars of Haiti regard the belief in zombies as purely mythical. From a Marxist perspective zombification — the image of people who have lost their minds and souls and are left only with the ability to work — is explained as symbolic comment on the historical process of colonialism.

In many parts of Africa zombies are an integral aspect of witchcraft beliefs; particularly where witchcraft discourses address issues raised by inequalities of wealth and power. For example, among the Bakweri of Cameroon new forms of wealth signalled a transformation in occult forces. When land was alienated for plantations by German and British colonists, the Bakweri were confined to reservations, and the plantations attracted a workforce from elsewhere. In this context a concept of nyongo witchcraft emerged. The Bakweri suspected prosperous outsiders of forming witch associations, taking deceased kin from the graves, and of transporting them by lorries to mount Kupe where they used the zombie spirits to work on invisible plantations. Yet the nyongo men themselves were in danger. If they were no longer able to sell their intimates to fellow witches, their colleagues would kill them, and reduce them to slavery. Initially these ideas exaggerated ambivalence towards wealth and hindered the emergence of a new elite among the Bakweri. However, when the Bakweri themselves earned much money from the cultivation of bananas, in the 1950s, nyongo witches were soon flushed out and brought under control. Hence the ban on individual enrichment was broken.

Similarly, in Malawi, witchcraft discourses constitute an argument about the morality of accumulation. Accumulation is endowed with moral adequacy when entrepreneurs make their constitutive relations visible by supporting their kin financially; and by redistributing wealth through patronage, gift-giving, and feasting. It is perfectly legitimate when entrepreneurs, who are motivated by these concerns, use medicines to protect their businesses and to ensure a steady flow of many customers. By contrast, accumulation which is motivated by individualism and greed is morally despised. In this situation entrepreneurs are said to achieve prosperity at the cost of human lives. Zombies are believed to reside with them, to protect their money, and to affect the minds of customers so that they can come to the business in large numbers. Zombies thus serve exactly the same purposes as medicines, but are an index of morally disputable witchcraft.

In South Africa discourses of zombies capture the illicit desire to dominate and the fear of being dominated. At a symbolic level the image of witches who keep many zombies resonates with the status of white industrialists and farm owners who employ many black labourers. The employment of zombies as servants in a nocturnal ‘second world’ echoes the daunting experiences of migrant labourers who leave their rural households for alien industrial and mining centres. The tasks of zombies resemble those of domestic assistants and farm labourers. They clean the homes of witches, fetch water and firewood, herd cattle, plough, sow, harvest, and run errands. The unique features of zombies exaggerate some of the less apparent consequences of domination. Zombies are only a metre tall; are similar in appearance; are hypnotized so that they display unquestioning obedience; and their tongues are cut. These features allude to the diminutive, childlike status of African labourers; who are all treated alike by their bosses; and are unable to express themselves. Moreover, zombies are sexless, are devoid of human desires, and are fed a meagre diet of maize porridge — the staple diet of South African labourers. Narratives of zombies also reflect upon the dependence of the dominated. Should witches die, their zombies will wander about endlessly in search of porridge. Being undead, they cannot return to their kin. Persons who aspire to positions of influence; and strong-willed mothers-in-law who command great authority over the wives of their sons, are those most often accused of keeping zombies.
— I. Niehaus
Hosted By Jeremy [Retro]