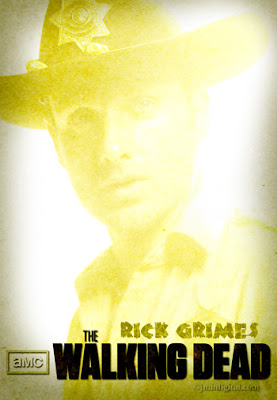 Before the zombie apocalypse Rick was a sheriff's deputy in the small town of Cynthiana, Kentucky, USA. He is shot by a criminal and subsequently awakens from a coma. After being mistaken for a zombie and hit over the head with a shovel by Duane Jones, Duane's father Morgan takes Rick in and explains the zombie apocalypse to him. In search of his wife, Lori, and son, Carl, Rick heads to Atlanta, Georgia, where it is said people were taken to for protection. Upon arrival Rick is nearly killed by a large group of zombies, being saved by a fellow survivor Glenn, who takes him to his camp where Rick reunites with his wife and son, as well as his former colleague Shane, who is depicted to have had a romantic relationship with Lori. Rick then leads a group of survivors, trying to find shelter and safe haven from the undead. After the camp is attacked by zombies Shane and Rick get into an argument. When Shane aims a gun at Rick, Carl Grimes shoots him through the neck.

Rick's group unsuccessfully tries to stay at a zombie infested neighborhood, which results in a death of one of their own. Eventually two other members of the survivors find a prison, where they seek refuge and decide to settle down. When searching for a nearby crashed helicopter Rick and several other survivors find the town of Woodbury, Georgia, where Rick's right hand is severed by the town's ruthless leader, The Governor. Woodbury attacks the survivor's prison with disastrous results and a large death toll, with those killed including Lori and her baby daughter Judith.

After the prison is made insecure by the attack, Rick and the surviving members leave with others to Washington, D.C. On the way to the capital, they find out that the man leading them, claiming to be in contact with D.C. scientists, is lying and find that the capital is as infested as the other major cities. They are eventually recruited to stay in a secluded and secure township on the outskirts of Washington D.C., called the Alexandria Safe-Zone. Each person tries to find a semblance of real life, but Rick doesn't trust the leader of the town, former US Congressman Douglas Monroe. He becomes the Constable, attempting to keep the peace in the town, but is eventually forced to kill a man who was abusing his wife and child.

Rick assumes leadership of Alexandria after Monroe grows reclusive over the death of his wife. The town is soon in danger, as a skirmish with a group of bandits attracts a nearby horde of zombies that quickly breach the town’s defensive walls. As the survivors fight for their lives, several people are killed and Rick’s son is grievously wounded by a gunshot to the head. Using the combined strength of all of those remaining in the community the survivors fend off the horde and Rick returns to Carl, whose condition is very dire. Following the attack, however, Rick concludes that the undead can be beaten if the survivors put their differences aside and work together. Rick mentions that this is the first time in a very long time that he has hope for the future.