Texas Frightmare Weekend, Anyone Going to this???

Texas Frightmare Weekend [April 29 - May 01, 2011]
http://www.texasfrightmareweekend.com/lifetype
The reason I am asking is the magazine "Rue Morgue" is running a contest to design a cover for them, but it only open to people going to the "Texas Frightmare". I am unavailable to go, but I did design a cover before I actually read the contest rules.  What I was hoping for was that someone could submit the cover I did and if it should win, you would enjoy the convention and all it's fun.  At the return of your trip, send me stuff [i will cover] or we can split it down the middle, this of course I do not get blown away by the other entries. 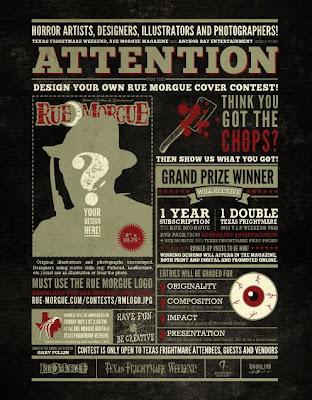 Official Rules:
Texas Frightmare Weekend, Rue Morgue and Anchor Bay Entertainment want YOU to design your own cover of Rue Morgue! Think you got the chops? Then show us what you got!

The grand prize winner will receive a 1 year subscription to Rue Morgue, 1 double Texas Frightmare 2012 V.I.P. weekend pass, a DVD pack from Anchor Bay Entertainment, and Rue Morgue and Texas Frightmare swag packs! Runner-up prizes are also up for grabs. Winning designs will appear in the magazine, both print and digital, and promoted online.
TO QUALIFY:
Entries should be 8? x 10.75? in size, MUST use the Rue Morgue logo (downloadable from rue-morgue.com/contests/RMlogo.jpg) and will be judged by Rue Morgue Art Director Ghoulish Gary Pullin for:
- ORIGINALITY (fresh ideas and innovation)
- COMPOSITION (relationship of type vs. image)
- IMPACT (execution and quality of the overall design)
- PRESENTATION (must be presented clean and neatly, flat or on a small easel).
Original illustrations and photographs encouraged. Designers using movie stills (e.g. Pinhead, Leatherface, etc.) must use an illustration or treat the photo.
Contest is only open to Texas Frightmare Weekend attendees, guests and vendors.
Entries accepted at the Rue Morgue booth at Texas Frightmare Weekend until noon on SUNDAY, MAY 1, 2011. Winners will be announced later that day at 2 p.m.
Hosted By Jeremy [Retro]