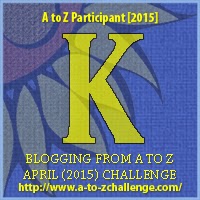 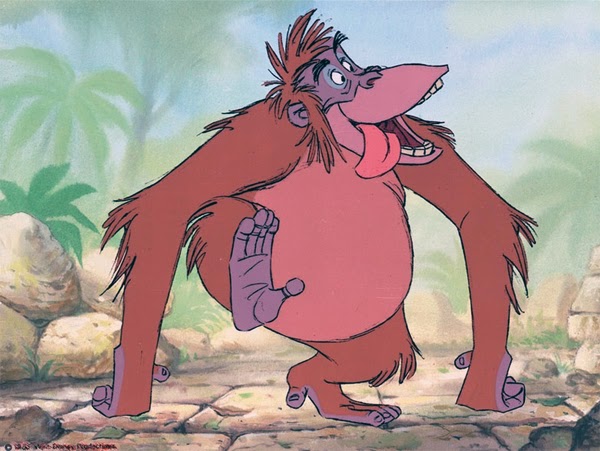 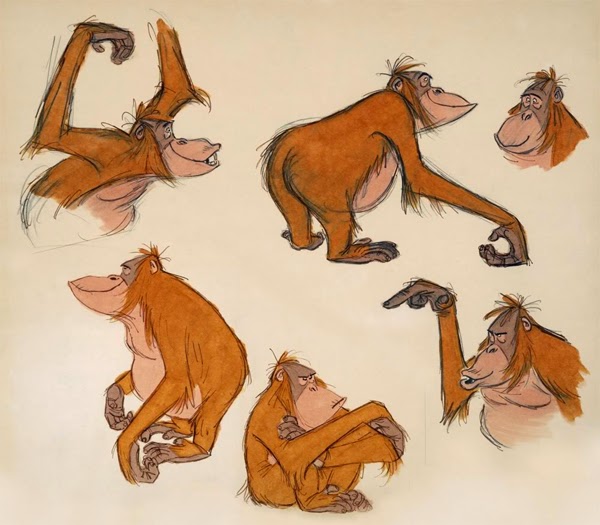 As the Disney movie is "inspired by" rather than "based on" the Kipling stories, the character King Louie does not appear in Rudyard Kipling's original book, as orangutans are not native to India. Also, Kipling insists that the Bandar-log, or monkeys, have no king, or any effective leadership. In the book, Mowgli is abducted by a band of nameless and leaderless Bandar-log (monkeys), but the rest of the scene plays out very differently from Disney's version. Bill Peet's original story for the film did not feature King Louie, but did have a bigger Bandar without a tail, who was perhaps meant to be their king. Peet left the Disney company due to a dispute he had with Walt Disney regarding the contents of his script, so his ultimate vision for the king of the Bandar-log remains unknown. Development of the story continued following Peet's departure, with his darker story giving way to a new emphasis on lightheartedness and jazzy tunes. In this company milieu King Louie eventually came into being, given life through the voice and personality of popular performer Louis Prima. Personality was also given to Louie by Milt Kahl, Frank Thomas, and John Lounsbery, three of Disney's Nine Old Men who animated the character. Kahl animated Louie's interaction with Mowgli, Thomas his solo song and dance portions, while Lounsbery animated his memorable scat duet with a disguised Baloo.
-------------------------
I am everywhere: TWITTER, FACEBOOK, HOWLIN’ WOLF: OLM and HBA [HORROR SITES]. Last visit MY T-SHIRTS STORE at NEATORAMA something always going on and it is one click away!
-------------------------
Hosted By Jeremy [Retro]