OCTOBER: WHO IS STRONGER... LAURIE STRODE or NANCY THOMPSON? 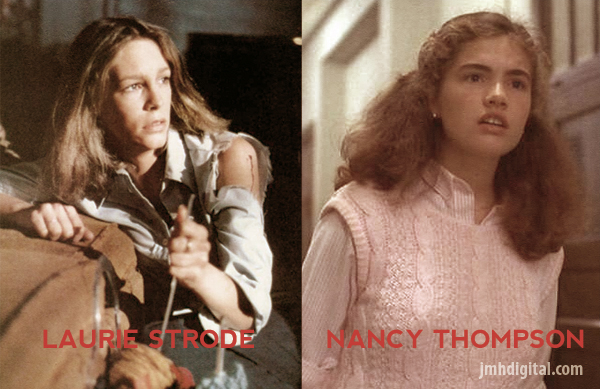 Laurie Strode is a fictional character in the Halloween horror franchise, portrayed by actresses Jamie Lee Curtis and Scout Taylor-Compton. She appears in six of the ten Halloween films, first appearing in John Carpenter's original 1978 film. She is the primary protagonist of the first, second, and seventh and appears at the beginning of the eighth; Laurie exemplifies the final girl stock character. Jamie Lee Curtis portrayed the role in the original run of the series, with Scout Taylor-Compton taking the role in Rob Zombie's reboot and its sequel. In academic materials, Strode is widely cited as the one of the earliest and most influential examples of the "final girl" slasher film archetype.
------------------------------------------------------------------------
Nancy Thompson is a fictional character in the A Nightmare on Elm Street film series. She was portrayed by actress Heather Langenkamp in the original film series and by Rooney Mara in the 2010 remake. Nancy is the primary protagonist and final girl in the 1984 original film, A Nightmare on Elm Street 3: Dream Warriors, and Wes Craven's New Nightmare. The character also appears in the comic book series based on the films as well as the 2010 reboot. The Nightmare franchise focuses on Freddy Krueger, a ghost of a serial killer who uses dreams to murder the children of the people who burned him to death as an act of vengeance. Nancy is one of these children, and the films depict her struggle to survive her dreams and defeat Krueger.

Was that the Boogeyman?
-Jeremy [Retro]