Doctor Who Knows, Do You?

Doctor Who is a British science fiction television programme produced by the BBC. The programme depicts the adventures of a Time Lord—a time travelling, humanoid alien known as the Doctor. He explores the universe in his TARDIS (acronym: Time and Relative Dimension in Space), a sentient time-traveling space ship. Its exterior appears as a blue British police box, a common sight in Britain in 1963, when the series first aired. Along with a succession of companions, the Doctor faces a variety of foes while working to save civilizations, help ordinary people, and right wrongs.

Dalek in-universe history has seen many retroactive changes, which have caused continuity problems. When the Daleks first appeared in The Daleks, they were presented as the descendants of the Dals, mutated after a brief nuclear war between the Dal and Thal races 500 years ago. This race of Daleks is destroyed when their power supply is wrecked. However they reappear in The Dalek Invasion of Earth, where they have conquered Earth in the 22nd Century. 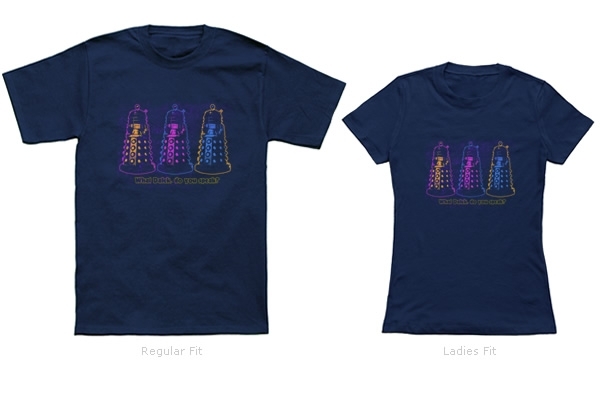 Later stories saw them develop time travel and a space empire. In 1975, Terry Nation revised the Daleks' origins in Genesis of the Daleks, where the Dals were now called Kaleds (of which "Daleks" is an anagram), and the Dalek design was attributed to one man, the crippled Kaled chief scientist and evil genius, Davros. Instead of a short nuclear exchange, the Kaled-Thal war was portrayed as a thousand-year-long war of attrition, fought with nuclear, biological and chemical weapons causing widespread mutations among the Kaled race. Davros experimented on living Kaled cells to find the ultimate mutated form of the Kaled species and placed the subjects in tank-like "travel machines" whose design was based on his own life-support chair.

And yes... I am letting you know that I have made a shirt design that I thought fit these to the needs of the Daleks. I want to welcome in the latest doctor and the actor "Peter Capaldi" 12th M.D. all the best to the new season. So join me and wear your new "DALEK SPEAK" design and what are your first thoughts of the new doctor. Do you care?
-Jeremy [Retro]