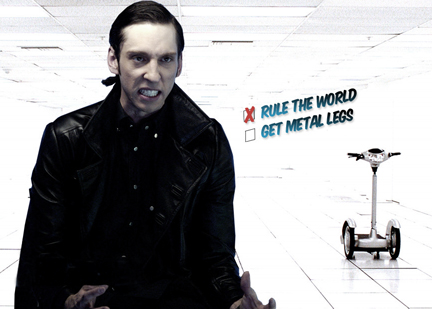 Alex is a single, 35-year-old video game tester who lives with his friend Josh. When Josh spends their rent money on Filipino hookers, his landlord kicks them both out, and Alex has to find a new place to live. Alex tries to stay with his marijuana dealer, Dante, but is unable to because Dante is adopting a wild lion to live in the house. Alex spends one night with his co-worker Jeff, but Jeff still lives with his parents. After an embarrassing "encounter" with Jeff's mom, in which he is caught masturbating in the bathroom and subsequently ejaculates on her, Alex is forced to move in with his grandmother. His grandmother has two eccentric friends, Bea and Grace, who also live there.

Alex is given many chores and fix-up projects to do around the house, but has a hard time completing them because his grandma and her friends are a constant distraction. He also finds it hard to get any work done. Alex discovers the three women have a fascination with the television program Antiques Roadshow and later is able to get some peace and quiet by giving them tickets to attend a taping of the show. At work, Alex meets the attractive Samantha, who has been sent by the company's corporate office to oversee the production of a new video game. Alex and Samantha hit it off, but the only person in the way of their relationship is the creator of the game they are all working on, J.P., a self-proclaimed "genius" who is obsessed with video games and has a crush on Samantha. Samantha is not interested in J.P. and declines his constant advances.

Meanwhile, in an attempt to sound cool to his younger co-workers and Kane, Alex says that he is living "with three hot babes". Alex's friends believe the lie and actually think the reason he is so tired every day at work is because he is living with three women who constantly "wear him out" in the bedroom. The real cause of his fatigue is because he stays up late at night working on his own video game, called Demonik, which he has been developing in secret for some time. Alex's grandma asks about the game one night and he teaches her to play it. To his surprise, she becomes quite good at it and beats many levels. After Alex and his co-workers finish successfully testing Eternal Death Slayer 3, their boss Mr. Cheezle tells Samantha to take the boys out to eat at a vegan restaurant, but they instead make fun of the restaurant and their waiter when they arrive, and then leave to a burger shop. When Jeff has to use the bathroom and refuses to use the one in the restaurant, Alex is forced to take everyone to his house.

Alex comes home to find that his grandma, Grace, and Bea drank all of his pot, which they thought was tea. When Samantha admits to smoking weed too, Alex calls up Dante and throws a wild party. During the party the group prank-calls J.P.and leaves him a voicemail that makes fun of him about wanting to be a robot. J.P. is upset by the message and shows up at Alex's grandma's house a couple nights later in tears. Feeling bad for him, Alex agrees to let him borrow his only copy of Demonik and test it out for a few days. To get back at Alex for making his life miserable, and becoming accustomed to stealing others' ideas, J.P. steals the game and tries to pass it off as his own at work. Mr. Cheezle does not believe Alex when he insists the game is his, since it was his only copy, so his friends call his grandmother to the office. Because she has mastered the game already, she plays J.P. and wins to prove it belongs to Alex. In the end, Alex is vindicated and creates a successful game.

Six months later, Alex and his friends throw a party at Dante's basement. While drinking champagne and celebrating the creation of the game, they hear a trampling of an elephant, Dante tells them it an present that the Doctor and Dante brought for Alex, in response in fear of the house basement collapsing ,they leave the house through the back door of the basement, and the screen goes black and Dante says "Yea Monkey, karate chop the elephant" while the monkey is screaming.