Now there Should Be More Zombies... 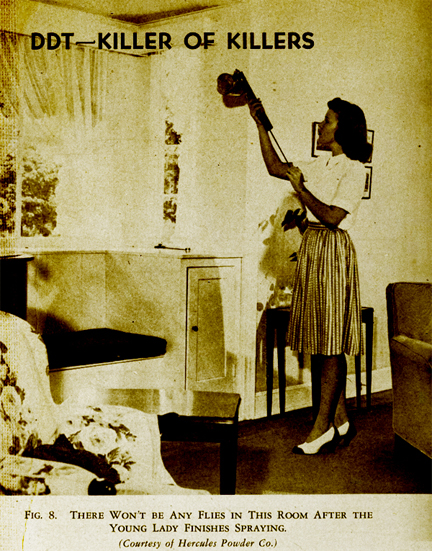 DDT could have made a world of ZOMBIES
DDT (dichlorodiphenyltrichloroethane) is one of the most well-known synthetic pesticides. It is a chemical with a long, unique, and controversial history.
First synthesized in 1874, DDT's insecticidal properties were not discovered until 1939, and it was used with great success in the second half of World War II to control malaria and typhus among civilians and troops. The Swiss chemist Paul Hermann Müller was awarded the Nobel Prize in Physiology or Medicine in 1948 "for his discovery of the high efficiency of DDT as a contact poison against several arthropods." After the war, DDT was made available for use as an agricultural insecticide, and soon its production and use skyrocketed.
Human Exposure:
People living in areas where DDT is used for IRS have high levels of the chemical and its breakdown products in their bodies. Compared to contemporaries living where DDT is not used, South Africans living in sprayed homes have levels that are several orders of magnitude greater.Breast milk in regions where DDT is used against malaria greatly exceeds the allowable standards for breast-feeding infants. These levels are associated with neurological abnormalities in babies.