Photoshop Can Be Fun? 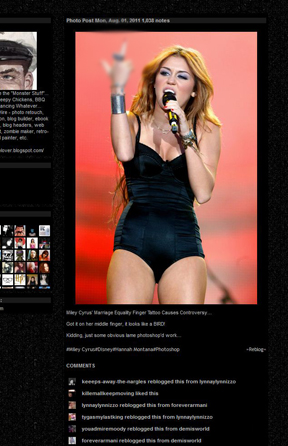 Okay, I feel really bad... not enough to take it down, yet!
Here I put up a funny photo on my "tumblr" site which went virtually unknown for a couple of days and I had just figured out how to turn off the emailed comments, so walking around with some of my posted stuff deciding what should stay and go... I discovered this had been re-blogged over a 1000 times. I made it in about three seconds in Photoshop, and now it's getting the hits... I even say it is a fake in my post, but as it gets re-blogged it doesn't always take that text with it. So I wanted to say I am sorry Ms. Montana for all the grief you might be suffering, if not enjoy the attention.

Chicago Comic Con stuff is coming, I shot over 700 hundred photos of things from people, celebrities and scenic stuff. Also I stopped out at the "MAN OF STEEL" set again before nicely pushed off the set as they prepared for a scene with Amy Adams. I have some more fun photos, which nothing that reveals any part of the story... I don't think.
-Jeremy [iZombie]
Hosted By Jeremy [Retro]