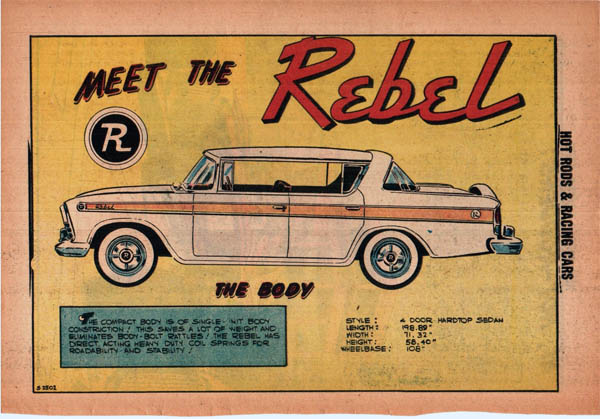 The Rambler Rebel is an automobile that was produced by the American Motors Corporation (AMC) of Kenosha, Wisconsin for the 1957–1960 model years, as well as again for 1966 and 1967.

Introduced as a stand-alone model in one body style, the 1957 Rambler Rebel is credited for being the first factory-produced intermediate-sized high-performance car. This later became known as the muscle car market segment. It was also to be among the earliest production cars equipped with electronic fuel injection.

The second and third generations essentially became the equivalent Rambler Six models, but equipped with a V8 engine. The Rebel nameplate was reintroduced in 1966 as the top-line intermediate-sized two-door hardtop. For the 1967 model year, AMC's all-new intermediate line took the Rebel name. American Motors dropped the historic "Rambler" marque from these intermediate sized models to become the AMC Rebel starting with the 1968 model year.