BACK TO THE FUTURE...STRICKLAND... wasn't mad you were only a SLACKER! 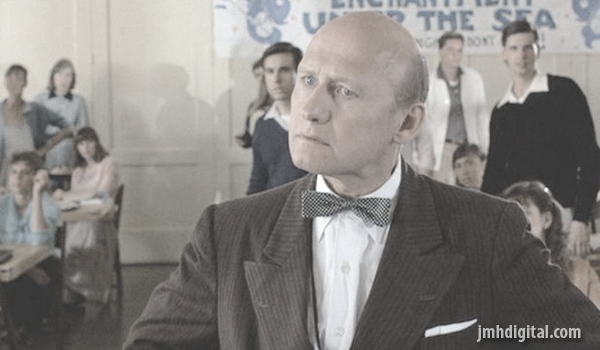 Tolkan is known for his role in the 1985 film Back to the Future as the strict, Hill Valley High School head of discipline Gerald Strickland. He referred to Marty McFly, his father, and Biff Tannen derisively as "slackers." He reprised the role in the 1989 sequel Back to the Future Part II, where unnamed gang members made a drive-by assault on him in a bleak alternate present (then 1985). He also referred to these criminals as "slackers" as he shot back. In 1990, he played the part of Mr. Strickland's grandfather Chief Marshal James Strickland in Back to the Future Part III. Tolkan would reprise his role as Strickland in addition to playing his character's ancestors and descendants in the 1991 animated series spin-off.

Other well-known roles include an FBI agent in WarGames and Stinger, the no-nonsense commander of an aircraft carrier in the 1986 box-office hit Top Gun. He portrayed the role of cold and determined District Attorney Polito in Sidney Lumet's Prince of the City. He also appeared in the 1987 film Masters of the Universe as Detective Lubic. He played a dual role in the Woody Allen comedy Love and Death, playing both Napoleon and a look-alike. He also appeared as Big Boy Caprice's accountant "Numbers" in the 1990 Warren Beatty film Dick Tracy.
One of the nicest people, met him a few years back...
-Jeremy [Retro]