Do You Want to Find Hell With Me? 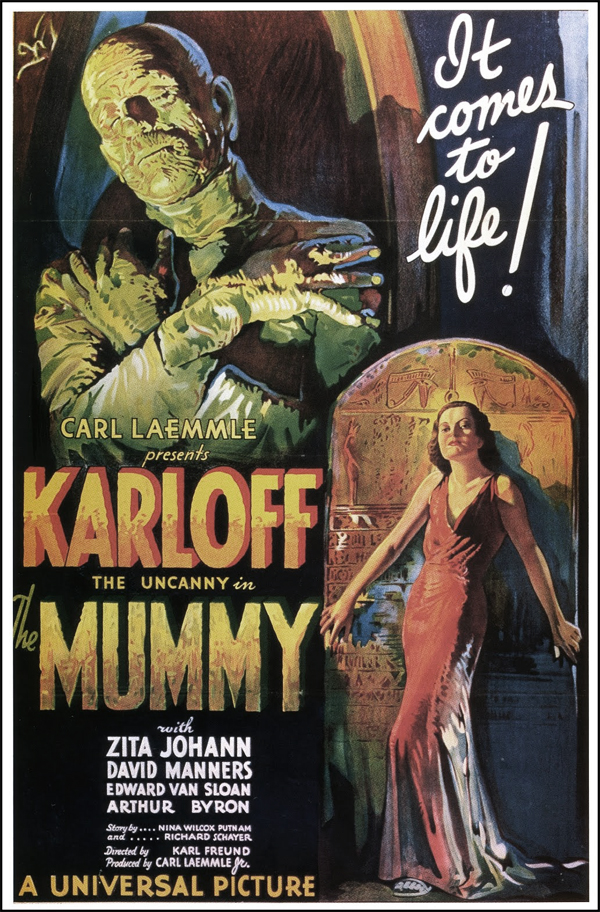 An ancient Egyptian priest called Imhotep (Boris Karloff) is revived when an archaeological expedition in 1921, led by Sir Joseph Whemple (Arthur Byron), finds Imhotep's mummy. Imhotep had been mummified alive for attempting to resurrect his forbidden lover, the princess Ankh-es-en-amon. His friend, Dr. Muller (Edward Van Sloan) inspects the mummy and exclaims “The viscera were not removed. The usual scar made by the embalmers knife is not there.” Sir Joseph Wimple responds, “I suspected as much.” Despite Muller's warning, Sir Joseph's assistant Ralph Norton (Bramwell Fletcher) reads aloud an ancient life-giving scroll – the Scroll of Thoth. Imhotep escapes from the archaeologists, taking the Scroll of Thoth, and prowls Cairo seeking the modern reincarnation of Ankh-es-en-amon.

10 years later, Imhotep is masquerading as a modern Egyptian named Ardath Bey. He calls upon Sir Joseph's son Frank (David Manners) and Prof. Pearson (Leonard Mudie). He shows them where to dig to find Ankh-es-en-amon's tomb. The archaeologists find the tomb, give the mummy and the treasures to the Cairo Museum, and thank Ardath Bey for the information.

Imhotep encounters Helen Grosvenor (Zita Johann), a woman bearing a striking resemblance to the Princess. Believing her to be Ankh-es-en-amon's reincarnation, he attempts to kill her, with the intention of mummifying her, resurrecting her, and making her his bride. She is saved when she remembers her past life and prays to the goddess Isis to save her. The statue of Isis raises its arm and emits a beam of light that destroys the Scroll of Thoth, thereby reducing Imhotep to dust. Frank calls Helen back to the world of the living while the Scroll of Thoth burns.
----------------------------
-------------------------
I am everywhere: TWITTER, FACEBOOK, HOWLIN’ WOLF: OLM and HBA [HORROR SITES]. Last visit MY T-SHIRTS STORE at NEATORAMA something always going on and it is one click away!
-------------------------
Hosted By Jeremy [Retro]