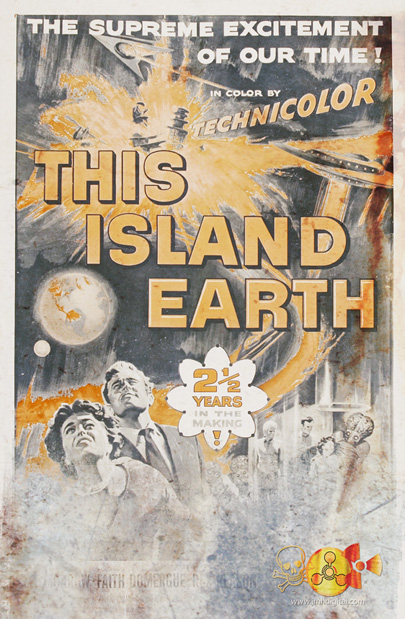 This Island Earth [1955]
Dr. Cal Meacham, a noted scientist, receives an unusual substitute for electronic condensers that he ordered. He receives instruction and parts to build a complex communication device called an interocitor. Although neither Meacham nor his assistant Joe Wilson have heard of an interocitor, they immediately begin constructing it. When finished, a mysterious man named Exeter appears on the interocitor's screen and tells Meacham he has passed the test. His ability to build the interocitor demonstrates that he is gifted enough to be part of Exeter's special research project.

Intrigued, Meacham is picked up the next day at the airport by an unmanned, computer-controlled Douglas DC-3 aircraft with no windows. Landing in a remote area of Georgia, he finds an international group of top-flight scientists already present – including an old flame, Dr. Ruth Adams. Cal is almost immediately suspicious of the odd-looking group of men leading the project.

Cal and Ruth try to flee with a third scientist, Steve Carlson, but their car is attacked and Carlson is killed. When they take off in a small plane, Cal and Ruth watch as the facility and all its inhabitants are incinerated, and their plane is drawn by a mysterious beam into a flying saucer. They learn that Exeter and his band are from the planet Metaluna, having come to Earth seeking uranium deposits as well as scientists to help defend their planet in a war against the evil Zagons. Exeter informs the Earthlings that he is taking them back to his world. Exeter and the Metalunans are attacked by Zagon star ships, carrying meteors, to be used to destroy them and Metaluna. The Metalunan saucer easily avoids each attack, by dodging the oncoming planetoid bombs. 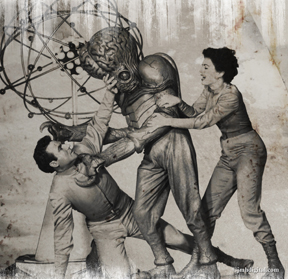 After a mind-bending journey, they arrive to find the planet under full bombardment and falling quickly to the enemy. Metalunan society is breaking down and there is little hope. Their leader, The Monitor, reveals that the Metalunans intend to relocate to Earth and insists that Meacham and Adams be subjected to a Thought Transference Chamber in order to subjugate their free will so they cannot object. Exeter believes this to be immoral and misguided since it constrains their ability to help the Metalunans. Exeter decides to help Cal and Ruth escape, thus revolting against his own kind, before they enter the brain-reprogramming facility.
Exeter is badly injured by a Mutant while the three escape from Metaluna prior to the final destruction of the planet, transforming it into a new star, to light other worlds. The Mutant also boards the craft, but dies as a result of pressure differences on the journey back to Earth.

As they enter Earth's atmosphere, Exeter sends Cal and Ruth on their way in their small plane, but he himself is dying and the ship is nearly depleted of energy. With no other options, Exeter uses the craft's remaining power to fly it out to sea and crash.
Hosted By Jeremy [Retro]