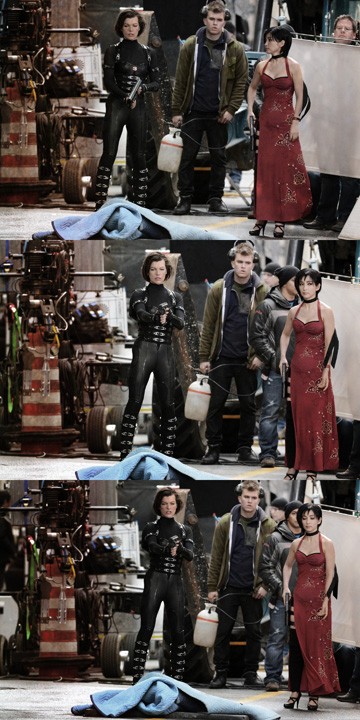 Anyone want to play with "Alice" another round?
It looks like Milla is shooting at this blanket, what does she have a against this blanket... Maybe Linus knows? I hope this film stands up to the first two films and focuses on story... not just 3D or by next year 4D [you know they just come to your house and act it out for you]. They will charge you one million dollars per screening per person, but you need to provide your own popcorn.
-Jeremy [iZombie]

Ps. Rest in Peace... Karl Slover! (September 21, 1918 – November 15, 2011) was a Slovak-born American actor and was one of four surviving munchkins from the 1939 film The Wizard of Oz. At the time of his death he was survived by Jerry Maren, Margaret Williams Pellegrini and Ruth Robinson Duccini. A lifelong bachelor, Slover resided in Dublin, Georgia, until his death.
Hosted By Jeremy [Retro]