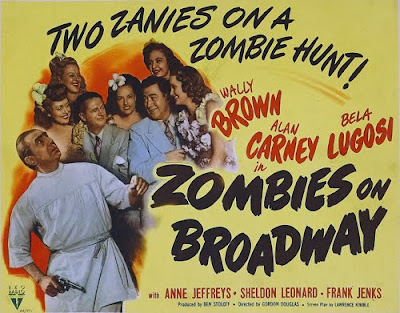 Zombies on Broadway [1945]
Duo of Jerry Miles and Mike Strage are employed as Broadway press agents. Miles and Strage's latest idea is to hire a genuine zombie for the opening of a new nightclub. The boys head to the Caribbean island of San Sebastian (also featured in RKO's I Walked With a Zombie and The Ghost Ship) where they meet the beautiful cabaret singer Jean la Dance. In exchange for her help, Jean wants passage off the island. Miles and Strage eventually meet up with the zombie expert Professor Renault. Unknown to them, the professor's zombie has captured Jean and brought her to the Professor's secret laboratory, While Miles and Strage investigate the house, Jean awakes to find herself gagged and strapped to a table as the Professor's next test subject. Before he can proceed to give Jean the serum his guard dogs detect intruders. Jean is quickly spirited to a secret dungeon where she is tied up but manages to escape. Strage becomes "zombified" by being under the spell of Renault's secret formula and Miles, la Dance, and Strage return home. When Strage comes out of his trance, the boys must face the wrath of Ace Miller, a nightclub owner, who is more frightening then anything they've seen yet.

Email ThisBlogThis!Share to TwitterShare to FacebookShare to Pinterest
On The Menu: Movies