A Question to: Alex J. Cavanaugh and a Word About CassaStorm

Being Retro: If this was turned into a film trilogy, who would you like to play the lead and would you do interviews [see you, finally]?

Alex J. Cavanaugh: Wow, who would pass for all three of Byron’s ages in such a short span of time? I can see actors for the older Byron, but too old to play a younger version. Maybe if they could make Christian Bale young enough. He certainly has the intensity. Heard he has a temper though, so I’ll let you do the interview, my friend! As for interviewing me – only if someone thought it was really worthwhile.

Now I could tell you all good things about Alex, but you all ready know... I wish him and his book a world of success. Below is all you could possibly need to know about this third and final book "CassaStorm" in this science fiction trilogy. 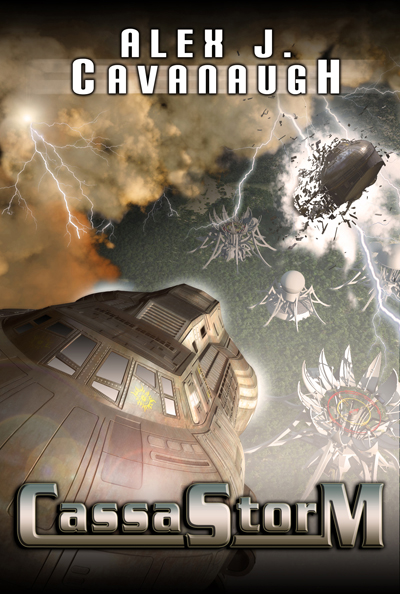 CassaStorm
By Alex J Cavanaugh
From the Amazon Best Selling Series!
A storm gathers across the galaxy…

Commanding the Cassan base on Tgren, Byron thought he’d put the days of battle behind him. As a galaxy-wide war encroaches upon the desert planet, Byron’s ideal life is threatened and he’s caught between the Tgrens and the Cassans.

After enemy ships attack the desert planet, Byron discovers another battle within his own family. The declaration of war between all ten races triggers nightmares in his son, threatening to destroy the boy’s mind.

Meanwhile the ancient alien ship is transmitting a code that might signal the end of all life in the galaxy. And the mysterious probe that almost destroyed Tgren twenty years ago could return. As his world begins to crumble, Byron suspects a connection. The storm is about to break, and Byron is caught in the middle…

“CassaStorM is a touching and mesmerizing space opera full of action and emotion with strong characters and a cosmic mystery.” – Edi’s Book Lighhouse

“…mesmerizing story of survival, personal sacrifice, tolerance, and compassion. It’s a rare jewel that successfully utilizes both character and plot to tell a story of such immense scope and intimate passion…” - Nancy S. Thompson, author of The Mistaken

"An exciting, nail-biting read which sweeps the reader off on adventures in another galaxy."
- Nicua Shamira, Terraverum

Alex J. Cavanaugh has a Bachelor of Fine Arts degree and works in web design and graphics. He is experienced in technical editing and worked with an adult literacy program for several years. A fan of all things science fiction, his interests range from books and movies to music and games. Online he is the Ninja Captain and founder of the Insecure Writer’s Support Group. The author of the Amazon bestsellers, CassaStar and CassaFire, he lives in the Carolinas with his wife.

Email ThisBlogThis!Share to TwitterShare to FacebookShare to Pinterest
On The Menu: Alex J. Cavanaugh