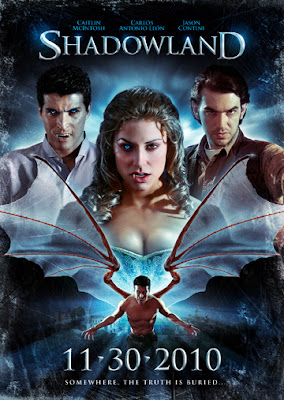 http://www.shadowlandthemovie.com/
A taught reinvention of vampire lore, Shadowland opens in modern day North America, where construction workers uncover an old stone cross and what appears to be a wooden stake.  They remove the stake from the ground, a slumbering vampire, allowing Laura (Caitlin McIntosh), to revive and rise from the earth. Beaten and weak, Laura is unable to speak, remember who she is, or even the fact that she is a vampire!
As Laura attempts to make sense of the strange new world around her, she begins to remember not only an idyllic human life in 1897 but the handsome Lazarus (Carlos Antonio León), a mysterious lover who may not have had her best interests in mind. Soon Julian (Jason Contini), a world-weary vampire hunter employed by the church, begins tracking Laura, but as he closes in for the kill he learns  that things are not what they seem.
An ambitious, award-winning indie feature, Shadowland relies on  character, tension, and a series of reveals to tell the tragic story of an anti-heroine.
Hosted By Jeremy [Retro]