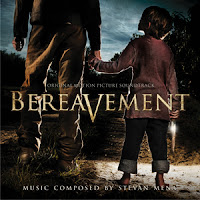 
Malevolence: Bereavement is the first chapter in the horrific ten year odyssey of Martin Bristol, a 6 year old child, abducted from his backyard swing, and forced to witness the brutal crimes of a deranged madman. If a child is taught only to hate, can their violent actions be considered evil?
What you might not be aware of this our 10th Score release here at Howlin' Wolf Records and this is the prequel/sequel to the first release, which too was composed by Stevan Mena. The first film "Malevolence" got such a huge following it demanded more... we got more. Stevan Mena serves as writer/director/composer to both of these releases and I am sure there are more hats he has worn during the making and production of both.  You shall be afraid... down to your core!.. Strong film, strong cast... and now the score.
-Jeremy [Retro-Zombie]
------------------------------
-------------------------
Check out the latest reviews, music and scores/soundtracks at Howlin' Wolf Records: On-Line Magazine or find the latest horror sites over at Horror Blogger Alliance. Or last but not least visit the madness at [Retro-Zombie] there is always something going on and it is one click away!
-------------------------
Hosted By Jeremy [Retro]