Top Ten Films They Should Have Made Blogfest... 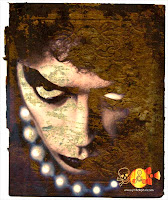 Okay here is a great idea I am taking part in over at the blog site "Ellie G."  in her first blogfest...festival. The idea is that actors or actresses in films that could be played by other people like Clint Eastwood as Superman, which I am taking her example.  So here is my list of ten:
01. Robert Englund - A Nightmare on Elm Street [2010] okay this is a easy one, not that Jackie Earle Haley isn't awesome... not as Freddy Krueger.
02. Kane Hodder - Friday the 13th [2009] I am only making this a reference, because it would have been a better Jason Voorhees... Not making it a better movie, just a better character.
03. Elijah Wood - Alice In Wonderland [2010] - as the Mad Hatter before you baste me look at the poster with Depp's face... almost identical.  Either one would have done a great job, but it was about Alice... not the Hatter.
04. Arnold Schwarzenegger - 300 [2006] - as King Leonidas, now just think about it...
05. James Frain - Batman: The Dark Knight [2008] - replacing Heath Ledger as the Joker, once again not for a talent issue, but more as a replacement.
06. Brooklyn Decker - Fantastic Four: Rise of the Silver Surfer [2007] to replace Jessica Alba as the Invisible Woman / Susan Storm, it might have been a better film.
07. Jennifer Connelly - The Incredible Hulk [2008] - to replace the Betty Rose character played by the unbelievable as a rocket scientist Liv Tyler.
08. Jim Sturgess - G.I. Joe - The Rise Of Cobra [2009] - to replace Joseph Gordon-Levitt as Rex Lewis / Cobra Commander... it might have been a little easier to take.
09. Sean Connery - Lord of the Rings [2001 to 2002] - as the mighty Saruman, not that Christopher Lee was not amazing, but this is a fantasy list.
10. Summer Glau - Street Fighter - Legend Of Chun Li [2009] - to replace the acting skills of  Kristin Kreuk [who I love mind you, and mostly cause she left Smallville] this movie was not right for her.
Hosted By Jeremy [Retro]