Stuck in the middle with you. Well Ma'am, JUST THE FACTS! 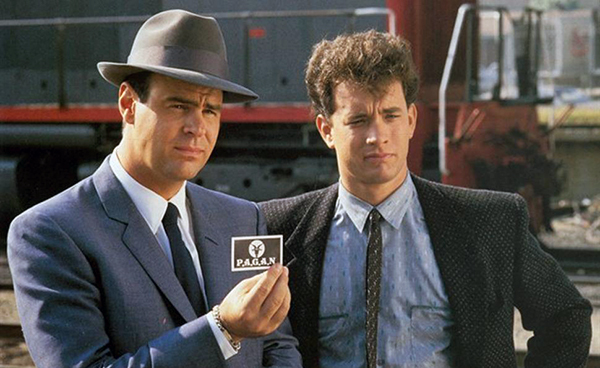 Dragnet is a 1987 American buddy cop comedy film, directed and co-written by Tom Mankiewicz in his directorial debut. Starring Dan Aykroyd and Tom Hanks, the film is based on the radio and television crime drama of the same name. The screenplay, both a parody of and homage to the long-running television series, was written by Aykroyd, Mankiewicz, and Alan Zweibel. The original music score is by Ira Newborn. Aykroyd plays Joe Friday (nephew of the original series protagonist) while Hanks plays Pep Streebek, his new partner. Harry Morgan reprises his role from the television series as Bill Gannon, now a captain and Friday and Streebek's boss.
I am not stuck in the past, just sometimes it's nice to visit and it reminds me of the things I really liked. I am still riding the dark carriage of life at the moment, the road is long and I cannot see out the windows. How you been? Hopefully life has given you all roses, unless you don't like roses... I give you my late friend Tina favorites... sunflowers. I miss doing this everyday, miss you guys and this little sounding board blog. As I still prep for my glorious return, I do hope to post all of October again... we will see.
-Jeremy [Retro]
----------------------------
-------------------------
I am everywhere: TWITTER, FACEBOOK, HWR: SIX STRINGS MAGAZINE and HBA [HORROR SITES]. Last visit MY T-SHIRTS STORE at NEATORAMA something always going on and it is one click away!
-------------------------
Hosted By Jeremy [Retro]